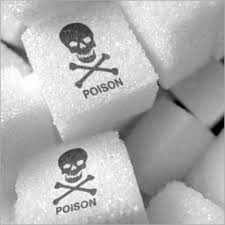 I’m now 1 week off sweets and there have been some hairy moments.  I did lose a battle with a handful of chocolate chips, but aside from that I’ve been pretty good.  Cutting out sweets is probably one of the most difficult – but also one of the best – ways to cut your calorie counts down.  I thought I would add an interesting video from sixty minutes that adds to prior posts on the addictive nature of sugar.  I went and looked up some of the articles by some of the authors in the program to bring you more of the information.

This is an commentary in one of the world’s leading scientific journals where Dr. Lustig addresses the contribution to added sugars to poor health in the western world.  He advocates regulation of sugar based on four criteria.  1.  Unavoidability.  He points out that sugar is an additive to almost all processed foods.  2.  Toxicity.  He cites evidence implicated sugar specifically as the major contributing factor to the metabolic syndrome.  3.  Potential For Abuse.  See my prior posts (https://weightlosscounterrevolution.com/2012/05/14/on-crack-and-ice-cream-part-2/).  4.  Negative Impact on Society.  He cites the morbidity of the metabolic syndrome as arguing for the need to regulate sugar.

The rest of the article advocates for governmental regulation of sugar.

In this article, as described in the video, a group of young adults were locked into a research center where every thing they ate or did was tightly controlled.  They had them eat normal diets and then made them get 25% of their calories from beverages sweetened with high fructose corn syrup (HFCS).   After 2 weeks they measured their cholesterol and triglyceride levels and found a significant increase in the group that had the HFCS.

I left out the research on cancer because it is mostly animal and cellular research.  There is data linking obesity to many types of cancer but I felt that section was more alarmist.  Additionally, while I generally feel that the word ‘toxic’ is over-used in a far to melodramatic way, I thought that this was a particularly good piece.  The Counter Revolution is all about using real evidence to change your relationship to your weight.  I think that the above video and research gives you a powerful and effective tool.  Cut out the sweets and cut out the pounds.  Easier said than done (trust me).

3 thoughts on “Is Sugar Toxic?”