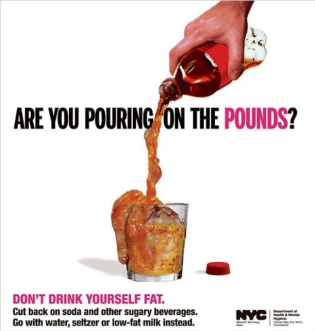 Mayor Michael Bloomberg made headlines recently with a proposal to ban sugar-laden soft drinks larger than 16 oz in the city of New York. There was, of course, the obligatory verbal diarrhea from the 24-hour cable news networks in response but all the chatter seemed to miss the point.  The media kept focusing on the politics of the issue while missing an opportunity to educate their viewership on a very crucial point.  I happen to believe the ban to be a bit of a futile endeavor but, whether you agree with move politically or not, the issue creates a tremendous opportunity to start an importrant conversation on weight loss and healthy eating.  The fact of the matter is that the evidence implicating sugar saturated beverages as public enemy number one in the obesity epidemic is very strong.  Targeting these drinks is a very powerful, successful, and relatively easy starting point in the weight-loss journey of many Americans.

It turns out that the astonishing rise in obesity tracks exactly with the rise in the consumption of sugary beverages.  It is crucial for you to understand that sugary beverages are more than just sodas.  The category includes juices, energy drinks, and sports drinks.  Don’t think your glass of orange juice is good for you because it comes from fruit.  Nutritionally speaking, it is no better than a can of Pepsi.  This is especially important for parents to know when picking out what to give their children to drink.  Sugar-sweetened drinks contribute 7.1% of total calorie intake and represent the largest single source of calories in the US diet. Consumption of these beverages increased by 135% between 1977 and 2001 and accounts for 81% of the increase in carbohydrate consumption in the past 20 years.

But why implicate Coke when there are so many high calorie foods out there?  What is so evil about these soft drinks?  The answer comes from multiple studies that have shown that when individuals drink sugary beverages, they do not reduce their solid food consumption in response.  For example, one study had a group of subjects eat an additional 150 calories of jelly beans while a different group drank an additional 150 calories of soda. The group that drank soda felt less full and ate more calories later in the day. It turns out that sugary drinks do not create a sense of fullness as well as solid foods. So not only do people get the high calories from the drink itself, they also end up consuming more calories throughout the day. One 12-oz can of sugar-sweetened juice or soda contains 150 kcal and 40 to 50 g of sugar. If these calories are added to a typical US diet even with no offsetting reduction in other caloric sources, this would lead to a 15-lb (6.75-kg) weight gain in one year. In fact, in one study the risk of becoming obese increased 60% for each additional sugar-sweetened drink consumed every day. There is no better mechanism for gaining weight than introducing a liquid carbohydrate with calories that are not fully compensated for by increasing satiety. If that wasn’t bad enough, these drinks may increase the risk of diabetes and cardiovascular disease with a unique efficiency because of their large contribution to a high dietary sugar load and large fructose fraction.  This leads to the development of a bunch of bad sounding and hard to pronounce things such as insulin resistance, β-cell dysfunction, inflammation, hypertension, visceral adiposity, and atherogenic dyslipidemia.  If you don’t know what any of those things are it’s not a problem just trust me that you want no part of them.  The bottom line is that sugary beverages are public enemy number one in the obesity epidemic more than any other type of food.

So you can argue the politics of Mayor Bloomberg’s decision but it is clear that there is a strong scientific basis for the singling out of soft drinks relative to other high calorie foods.  This may all have been an overwhelming barrage of statistics and medical mumbo-jumbo but trust me, this is all good news for you soda and juice drinkers out there.  If you read my book you know that the WLCR is all about putting you in action.  So here’s your ‘to do’ list:

1.  The most long lasting and effective thing you can do to lose weight is to completely and forever cut out all sugared soft drinks including fruit juices, sports drinks, energy drinks, or anything that has sugar or high fructose corn syrup in it (Diet or zero drinks are much better). And for goodness’ sake, don’t give it to your kids.  It’s borderline child abuse.

2.  Drink more water.   You know this is true, but there’s science to back it up.  Strong evidence indicates that consuming water before or with a meal reduces feelings of hunger and increases satiety in contrast to both diet and regular soft drinks

3.  Enter your email to follow the blog to get regular valuable tidbits of evidence based, no nonsense, fad resistant advice to help you live a healthier and lighter life.

7 thoughts on “Are You Pouring on the Pounds?”