A few months ago I was in The Coffee Bean and Tea Leaf in Southern California on a vacation.  Seeing as it was my vacation, I planned on splurging on one of those $5 frozen smoothie/coffee drinks that I do love so.  As I was making my selection I noticed taht The Coffee Bean has an interesting feature on their ordering menu.  They list the calorie counts of all of their products just to the left of the menu item.  When I saw that big Mocha Ice Blended had 540 calories, I was filled with surprise and flooded with that guilty feeling I get at the ice cream shop.  I just couldn’t bring myself to buy it (no matter how much as I wanted to).  Fortunately, they had a no sugar added option of the same drink which was only 260 calories.  It was really good so I didn’t mind the substitution.  The calorie information allowed me to make a much better decision than I would have if forced to decide from a position of ignorance.  Successful long-term maintenance of a healthy weight is nothing more than a collection of small decisions. 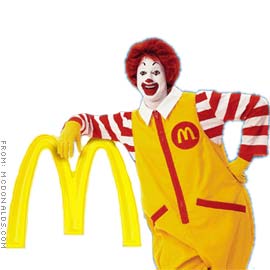 As the nation’s largest fast food chain, McDonald’s is often the symbol of obesity in the United States.  They are demonized for their high fat, high calorie menus that are a major contributing factor to the expanding waistlines of many of our countrymen.  To be honest, they, and their cohorts are in some ways responsible.  They have subtly and imperceptibly increased the size and calorie density of their food in the last few decades in a way that has changed our perception of what normal is and manipulates our subconscious.  In that respect their consumers were somewhat victims of ignorance.  There is still an element of personal responsibility on the part of customers to know that the value meals aren’t exactly a path to healthy living.  No party is completely innocent or completely guilty in this matter. In response to either their conscience or, more likely, the bad publicity and future regulations, Recent news from the Associated Press has come out that McDonald’s restaurants will begin listing calorie counts on all their menu items.  Regardless of the motivations, Ronald is ahead of the curve and should be patted on the back for his efforts.  We now have noone to blame but ourselves if we make bad choices in his restaurants.  I hope this will be a feature of restaurant menus across the country.

Granted, this is not going to solve the obesity epidemic in our country by any means, but any intervention which increases our ability as consumers to make wise and healthy choices is a good thing.  As I have shown in prior posts (Why You Can’t Be Trusted and Test Your Knowledge), small changes can make big differences over long periods of time.   If I was one of those coffee chain junkies who got a mocha ice blended every morning and switched to the no sugar version I would save 280 calories a day, 8,400 calories a month, and 102,200 calories a year.  That would lead to a 29 pound weight loss if everything else was kept the same.  This little math lesson is in honor of back to school but it also is an effort to emphasize how important small changes are.  Calorie counting is one of the most effective tools to help you make those small changes.  I personally use Myfitnesspal.comto help keep track but there are many other options out there.  Find the one that works best for you just make sure that ignorance is not the root of poor health.  If you make the right decisions every day, the small changes will add up to a healthier and lighter future, guaranteed.