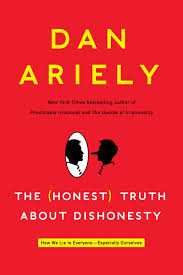 I have recently been reading an interesting book by Dan Ariely entitled The Honest Truth About Dishonesty.  The book is not about weight loss per se.  It’s an investigation into the complex human mechanisms that lead to dishonesty.  It turns out we are all dishonest to some degree or another.  The part of the book that got my attention and that I believe has the most practical applications to weight loss dealt with the relationship between fatigue and our internal moral conflicts.

Ariely discusses a concept called ‘ego depletion’.  Ego depletion is the effect of moral decisions on our ability to make future moral decisions.  Each and every one of us encounters multiple conflicts during the day where our higher moral self must control our lower impulsive self.  We all have a certain energy level for making those decisions.  Ariely describes it as a type of muscle.  Every time we make one of these decisions, we fatigue the muscle and make the subsequent such decision more difficult.  I’ll give a fictitious example:

Susie Snacker has gained quite a bit of weight over the years, almost certainly due to her snacking behaviors.  She will pop a handful of potato chips here and grap a couple chocolate chip cookies there.  When there are donuts in the breakroom at work she always grabs one (or two) on her break.  She finally makes up her mind to change her ways.  The next morning her new life begins with a trip to the pantry.  She wants to grab a cheese danish and get on her way but she fights the urge and pours a bowl of bran flakes even though it means she’ll be a few minutes late.  Later in the morning she passes on the bowl of candies at the secretary’s desk and snacks on some carrots.  For lunch, she decides on the baked chicken breast even though she really wants the fettucini.  Each of these decisions uses up a certain amount of energy and weakens her muscle a bit more.  By the time she gets home she’s exhausted and orders a pizza and eats the entire thing.

If Ariely is correct, and I believe he is, this opens our eyes to an important aspect of human nature that we must deal with to be effective in weight loss.  I think taking the following steps will go a long way to making your personal struggle a lot easier:

I hope this advice is helpful.  Now go and throw away the cookies in your pantry.

Error: Twitter did not respond. Please wait a few minutes and refresh this page.