It think it all started with the attempts by former NYC mayor Bloomberg to restrict the size of sugary drinks sold in the big apple.  Like, many, the idea seemed ridiculous.  I mean, what’s the difference between a large coke and a piece of chocolate cake?  Calories are calories, right?  I was inspired set off on a bit of a research project and came across some interesting literature about the difference between drinking your calories and eating them (you can click here to read more about that).  I also became fascinated about the research on the difference between calories obtained from carbs vs. other nutrition sources.  I can already feel your boredom.  Ugh, there he goes again with all that boring science.  I hear you.  So that’s why I’m bringing you this article from yahoo.com/health.  I think it’s a more real world graphic representation of the problem of drinking sugary drinks.  You should check out his website where he documented the entire stunt.  There’s some good information there.  It’s called 10 Cokes A Day.

Following in the body-hacking footsteps of Morgan Spurlock— the “Super Size Me” filmmaker who in 2004 ate three McDonald’s meals for 30 days straight — George Prior began guzzling down ten 12-ounce cans of Coca Cola daily for one month to see how the whopping dose of added sugar would affect his healthy physique.

“I got the idea because I read that Jude Law drank 10 Cokes a day to gain weight for his Dom Hemingway role, and I was joking with one of my brothers that that was probably a diet for some people,” Prior tells Yahoo Health. “But then we realized that amount of sugar isn’t that far from the norm for many Americans, so then I got really curious to see what would happen to me if I really drank ten Cokes, and it sounded like a fun experiment.”

On day one, Prior reported in the video, “I’ve just gotten back from the doctor where I’ve had a complete physical. I’m 50 years old and in good health.”

The Los Angeleno then began consuming 10 cans of Coke per day. That’s an additional 1,400 calories and 390 grams of sugar daily.

On day nine, Prior woke up weighing 176 pounds, eight pounds heavier than when he started.  “I’ve gained 2 pounds since yesterday,” Prior reported. “I don’t feel good.”

And after the full 30 days, he had gained 23 pounds. “I feel heavier, I can’t wear my long pants to work anymore,” said Prior in the video. “My clothes all fit tightly and I can’t bend over easily.” 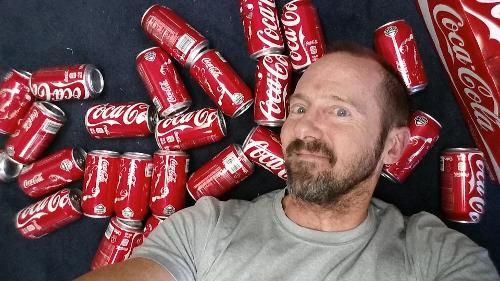 (Photo courtesy of George Prior / 10 Cokes A Day)

Ten cans of soda seems excessive, but Prior was consuming just twice the amount of added sugar that the average American eats daily. According to the USDA, Americans eat 156 pounds of added sugar every year, which breaks down to 194 grams per day. During his challenge, Prior drank 390 grams of added sugar daily.

The Recommended Daily Allowance of sugar for men is 36 grams, and 24 grams for women.

“Most people know that soda is not good for them, but for some reason, they think the risk of excess sugar consumption is less than that of having too much saturated and trans fat, sodium or calories,” Kristin Kirkpatrick, R.D, wellness manager at the Cleveland Clinic, told Yahoo Health. “Perhaps it’s sugar’s lack of sodium or fat that makes it the lesser of several evils, or perhaps people are simply of the mind frame that what they don’t know won’t hurt them.”

Sugar not only makes us pack on pounds, but it can also damage your heart, is linked to cancer, is as toxic to your liver as too much alcohol and can even make your brain age quicker and accelerate memory loss.

What did Prior do on Day 31, when the challenge ended? He threw away his unused cans of Coke. “If I have to drink another Coke in 1,000 years it would be one Coke too soon,” he said in the video.

While the “feeling of constant fullness and the basic inconvenience” of drinking all that soda were not enjoyable, Prior tells Yahoo Health “the worst actual physical discomfort was in the two days after I stopped drinking the Cokes,” which is when he “felt nauseated and tired and without appetite.”

But Kirkpatrick cautions that while many of us strive to avoid the “normal” sugary culprits — soda joins a long list with candy, cookies, cake, etc. — we are often duped by secret sugar-packed foods. “Examples include tomato sauce, fat-free dressing, tonic water, marinades, crackers and even bread,” she says.

There you go.  A very interesting story from what is almost certainly a very intersting guy.  If you are overweight and you drink sugary beverages of any kind including juice (I d0n’t care if it’s from a fruit – it’s a ton of sugar), sports beverages (you’re not going to look like Cam Newton if you drink too much Gatorade), sweet tea, or anything else with sugar in it, step one to successful weight loss is switching to diet, or better yet, to water.  You can expect the opposite results that George Pryor achieved – you’ll lose weight, feel better, have more energy, and fit into your clothes.

2 thoughts on “This is what happens when you drink 10 cans of Coke every day….”