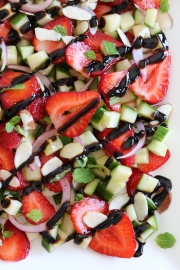 I have been searching skinnytaste.com for some great summer recipes that utilized the produce of the season to create something light and cool.  You can’t get lighter or cooler than the combination of cucumber and watermelon.  It makes for great hand lotions and salads too, enjoy!

END_OF_DOCUMENT_TOKEN_TO_BE_REPLACED

Put on your seatbelts because I’m about to drop some knowledge on you that could seriously improve your quality of life – whether you want to lose weight or not – so pay attention, seriously.   END_OF_DOCUMENT_TOKEN_TO_BE_REPLACED

It’s that time of year where the days are long, the nights are humid, and the mosquitos are militant. It’s also the time of year when people are out in the yard firing up the grills. Unfortunately, typical BBQ fare is not always the most diet friendly. Have you seen the nutrition facts on a hot dog with a bun? Its not pretty. And who only has one? For this reason, I found us a recipe that can satisfy our innate American need to cook meat on fire wihtout satisfying our American tendency to be morbidly obese. Happy grilling END_OF_DOCUMENT_TOKEN_TO_BE_REPLACED

I am a big fan of memes. I don’t know how to pronounce the word correctly but there’s something about the ability to capture a complex idea in a well written but brief statement packaged together with an interesting graphic. For those of you who do not know what a meme is, according to Webster it is an idea, behavior, style, or usage that spreads from person to person within a culture. In the context of the internet age, the term commonly (according to wikipedia) refers to  an activity, concept, catchphrase or piece of media which spreads, often as mimicry, from person to person via the Internet. END_OF_DOCUMENT_TOKEN_TO_BE_REPLACED

Is there any place in the world where one feels more judged than in the dentist’s chair? You’re sitting there in a relatively compromising position as the hygienist probes the depths of your mouth exposing all of your deepest lies. “Sure I floss regularly” (regularly but not daily). “I wear my mouth guard all the time” (all the times I feel like it which is not so many times). You can’t lie to the dentist or her minions. The truth is written on your gumline like a signed confession. And speaking of confession time, I have a cavity. It’s not a big one, if there is such a thing, but a failure in oral care nonetheless. I am so ashamed. END_OF_DOCUMENT_TOKEN_TO_BE_REPLACED