Recently I have jumped back on the calorie counting bandwagon. I’m not sure what triggered the recommitment but the forces of human self motivation are somewhat of a mystery to me so I didn’t do a deep dive into the topic. I had been using the myfitnesspal app for a while but I stopped using it for all the reasons that people stop doing things that are good for them. I mostly felt that I had figured out the diet thing well enough to wing it. Unsurprisingly I put on some pounds. So I planned on getting back into calorie counting.

As is the way with such things it took a few weeks from thought to actual action but act I did. In the process I figured out the secret to how people gain weight.

When I stopped calorie counting my eating patters changed ever so slightly. I would have a little bit of this here and a few extra of these there. I’d go back for seconds every once in a while.  I splurged a couple times but nothing dramatic.  I wasn’t eating out, I didn’t have many deserts.  I had even increased my exercise intensity and still was gaining weight. It was nothing major, just a little bit here and little bit there.

Then I started counting again. The interesting thing about counting is that it didn’t change my diet drastically. It just gave me the motivation to make 1 or 2 better decisions a day.  I didn’t have that nighttime ‘healthy’ but not zero calorie snack.  I didn’t fill up the plate as much.  I resisted temptation just a little.  The end result, I lost 3 pounds in 4 days. 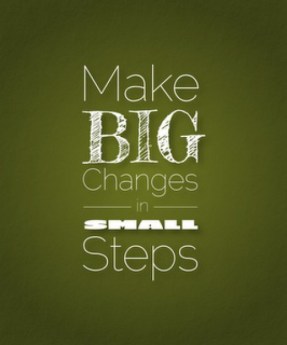 This is the secret to how people gain weight. For most of us, it’s never the one time event or single bad habit. It’s the accumulation of countless small seemingly meaningless decisions that add up to the end result. A few hundred extra calories a day can add up to dozens of pounds added over the years. And if you think about it, this is how we gain weight. Most of us don’t gain 50 or 100 pounds in a year. It’s 5-10 pounds a year which accumulates over time. Remember if you gain 5 pounds a year starting at 30 you’re going to look a lot different at 40 when you’re 50 pounds heavier.

It would then stand to reason that the secret to losing should be the same as the secret to gaining. The key to success is making multiple small decisions every day that add up over a long period of time.

For me, the calorie counting app gives me the small motivational boost that I need. The thought of going over my daily goal is just enough to make me think twice about what I eat. Since bad habits live in the moment when you make a decision before thinking about it, the split second of extra thought is enough to close the door on the moment over which bad habits rule. For you it may be something other than calorie counting that keeps you focused. As long a the tool you use keeps you in control of those split seconds that bad habits usually rule. If you take back those seconds you take back your life.

For more on this you might like a recent podcast I heard featuring the psychologist Dan Ariely discussinng motivation and decision making:  http://www.wnyc.org/story/this-is-the-year-you-stick-to-it/

One thought on “Why calorie counting works”